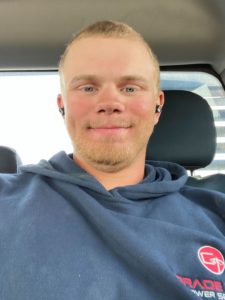 We’d like to introduce one of the newer members of the Grade Tech team, Jaxon Williams.

Jaxon joined the Grade Tech team in July 2021, starting as a Laborer in order to learn the ins and outs of the trade. The 21-year-old Salt Lake City native formerly worked in warehousing in a role that included a lot of customer service tasks. Unhappy with his role in warehousing, he decided to look for another career that would support his growing family. When his mom, Amanda (who is the Executive Assistant to Rory Hall, Grade Tech’s COO and Co-Founder) mentioned that Grade Tech was looking for people who wanted to build a career, Jaxon jumped at the opportunity.

Jaxon’s desire to build a lifelong career that can sustain his family is exactly the motivation Rory Hall is looking for in young new-hires. Rory explained, “Jaxon’s situation is a prime example of the opportunity available at Grade Tech,” said Rory Hall. “He is young and willing to work hard and learn to get ahead and build a career. He is building his experience and we are happy to have him on the team.” 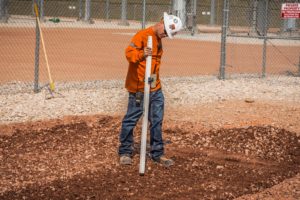 After six months on the job, Jaxon is not only grateful for the opportunity to build a career, but also for the opportunity to be a part of Grade Tech’s tight-knit team. “It is hard work, but what makes it worth it is the people I work with and the people I get to meet,” he explained. “I really like working together with the foremen and operators. It is a lot more personal here than at a big company and I am building solid friendships with my co-workers – I am beginning to feel like “one of the guys.”

Part of the team bonding that has occurred in recent months included a 21st birthday celebration for Jaxon in which Rory paid for his foreman and co-workers to take him out to celebrate a night on the town. 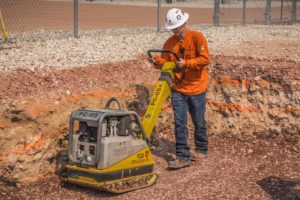 In addition to the camaraderie, Jaxon also likes the feeling of accomplishment that comes with a hard day’s work. “Some days are easier than others, but at the end of the day you feel accomplished,” he said. “You actually feel like you did something productive and it gets easier as you go.”

In the future, Jaxon looks forward to the opportunity to travel to jobs outside of Salt Lake City. He is learning as much as he can and hopes to develop the skills needed to advance into skilled roles within the company as he earns his way up.

When he is not at work, Jaxon enjoys spending time with his 7 ½ -month-old daughter, Loralai and his fiancé, Chloe.

At Grade Tech, it’s our people that set us apart from the competition. Each and every member of the Grade Tech team plays an integral role in the success of our projects and our company.