The ongoing COVID-19 pandemic has had a profound effect on people throughout the United States and around the world. Many families have been forced to sit by helplessly and watch their loved ones suffer, and even die, without being able to do anything to help. To add insult to injury, those who were sick had to suffer alone, as family members were prohibited from visiting COVID patients due to the highly contagious nature of the virus. The Grade Tech family is no different. We watched – and prayed – as our friend and colleague, Joe Mailo, suffered severe COVID illness that led to a coma and a 6-month journey to recovery.

This is Joe’s story. 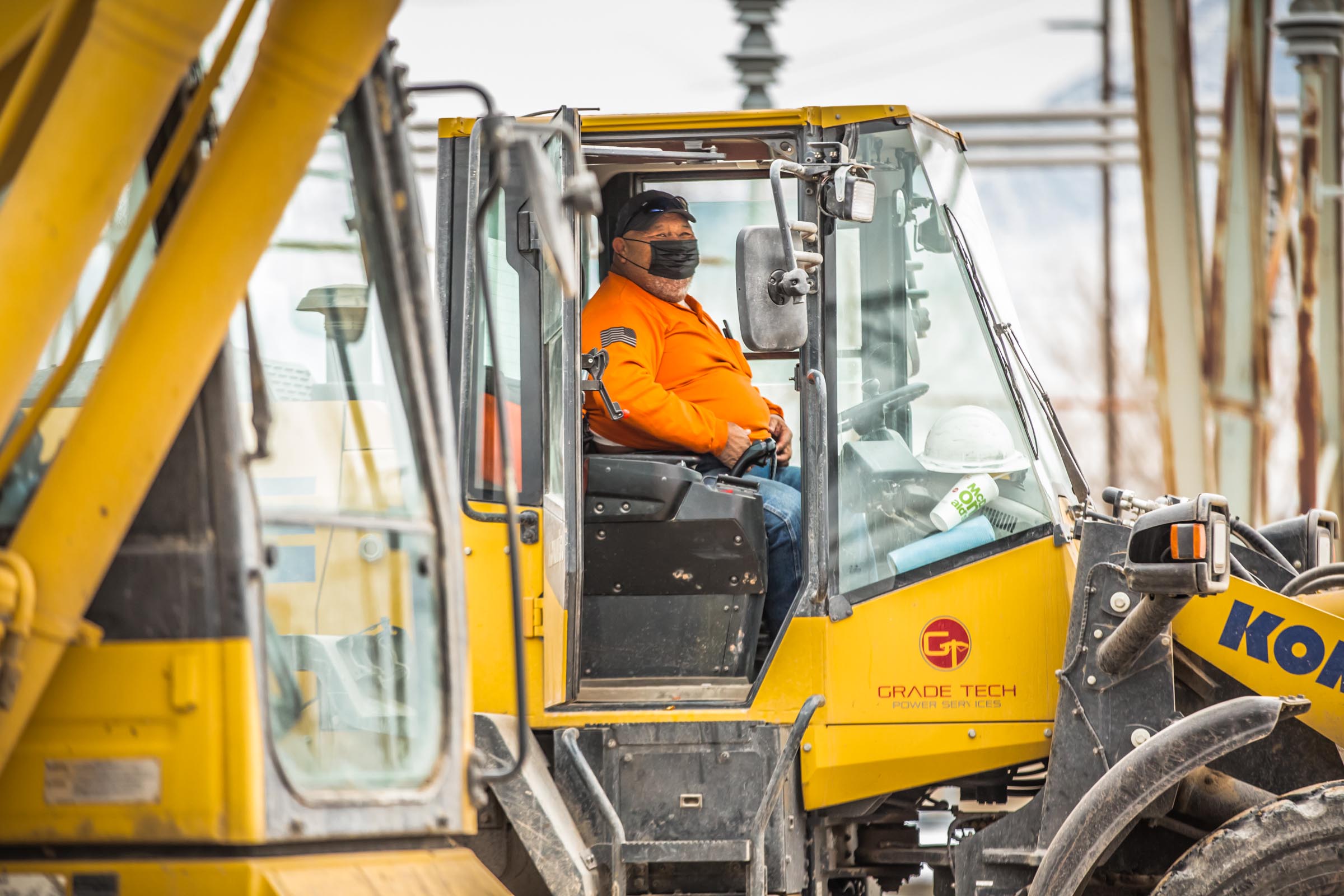 Heavy Equipment Operator Joe Mailo has been part of the Grade Tech family for more than 7 years. As part of our close knit team, he is someone upon whom we all relied to lead the way and get the job done, no matter what. In addition to being a colleague and teammate for many years, Joe is considered a friend by everyone at the company. So when Joe became sick with the COVID virus in March of this year (2021), it was not only a blow to the company, but to all of us who consider Joe and his wife, Denise Mailo, family.

Joe began feeling ill and showing symptoms of COVID at the beginning of March. He and Denise treated his fever for two nights at home before the symptoms worsened and they decided to go to the emergency room at McKay Dee Hospital Ogden. By the time they got there, Joe’s fever had skyrocketed and he was admitted immediately.

Joe spent the next 3 weeks in a coma. The outlook was bleak. While Denise worried and prayed at home, Joe was barely clinging to life. Then Denise received the call that no one wants to get. Doctors and nurses informed Denise that it was time for her and close family members to say their goodbyes to Joe.

Fortunately, the family’s prayers were answered on Easter Sunday when, against all odds, Joe woke up from the coma. To his surprise, he found himself in the hospital hooked up to machines. “I had no idea what was going on,” he explained of those first moments of consciousness. “I didn’t know how I got there. I didn’t remember going to the hospital.”

Of course, the first thing Joe wanted when he woke was Denise. But the hospital was still restricting visitors and she wasn’t permitted to see him. Joe said that not being able to see Denise when he woke up was probably the worst part of this whole ordeal. “I was devastated,” he said. “All I wanted was to see Denise, but I couldn’t.”

Joe would spend the next few weeks recovering in the hospital, still unable to see Denise or his family in person. Finally, on April 27th he was released from the hospital. But his battle against COVID was not yet complete.

He spent the next three and a half months going to physical and occupational therapy at Stuart Rehab to build up his strength. He wasn’t sure when or if he would ever be able to return to work, or even to the life he knew pre-COVID. He contacted Rory Hall, Grade Tech’s co-founder and Chief Operating Officer, to discuss his options. Rory told him to take as much time as he needed to recover fully and that his job would always be there for him if and when he was ready to come back.

Fortunately for Joe, his home family, and his Grade Tech family, he has made a full recovery and has recently returned to work.

Joe thanked the doctors and nurses who cared for him at the hospital, his therapists, and his family for the outstanding care and support he received throughout his illness. He also expressed his gratitude to his friends and family at Grade Tech for supporting Denise and him throughout his illness. “I appreciate them so much because they are the best boss and company I have ever worked for in my life,” Joe said. “While I was in the hospital, they not only continued to pay my salary, but they were reaching out to Denise to support her in any way they could. It makes me cry to know what Denise was going through, but the Grade Tech family was reaching out to her to help and care. They are the best family anyone could have.”

Joe plans to continue working with Grade Tech for the foreseeable future, despite reaching retirement age later this year. He explained that he is happy to be back on the job with a team that always has his back no matter what the circumstance. “I have to get on my knees and thank God that I can still see my family, friends, and my boss [Rory Hall] and his dad [Billy Hall],” Joe said. “Rory is truly one of my best friends. I know that he would have taken care of my wife if something would have happened to me.”

Unlike so many others, Joe’s story has a happy ending and he is grateful for the second chance he has been given. His advice: live your life now because you never know what’s around the corner. “I am so grateful for my health now – I have so much to look forward to. You never know what’s going to happen so you should do the best you can with every moment.”