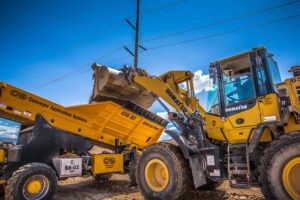 Joe Mailo, Heavy Equipment Operator, is celebrating eight years with the company this month. To commemorate that milestone, he has elected to help a pet rescue foundation that he and his wife, Denise, have been supporting for years—the Forever Family Rescue Foundation. The foundation supports animal shelters across the country to ensure that the most at-risk dogs find a forever family. If one shelter is crowded, the foundation will help to transport dogs to those with availability across the country.

Joe and Denise are the proud “parents” of three dachshunds that they rescued from a local shelter that is supported by the Forever Family Rescue Foundation. “We have always taken in dogs that needed a home, and we rescued many over the years, including the 3 we have now,” he explained. 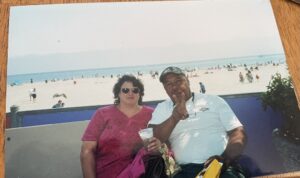 In honor of Joe’s anniversary at Grade Tech, the company is donating $1,000 to the foundation in his name. The charitable contribution is part of Grade Tech’s “giving back” program which supports the local community by celebrating employees’ work anniversaries (after the first 3 years of employment) by making annual donations to the employees’ “charities of choice.”

“Joe has a big heart and is always willing to help an animal in need, so it is my pleasure to honor him with a donation to the pet rescue,” said Rory Hall. “It is especially satisfying to be celebrating this eighth anniversary with Joe after his long fight against COVID-19. We didn’t know if he would live, let alone return to work, so it is really gratifying to me, my dad and everyone at Grade Tech to be celebrating this milestone with Joe.” 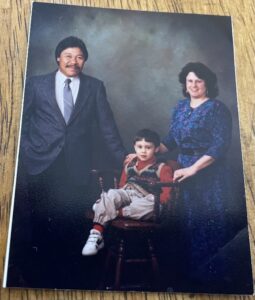 Joe became ill with COVID-19 in March of 2021. He spent three weeks in a coma and his family was told to say their goodbyes. To everyone’s surprise, Joe regained consciousness on Easter Sunday. He then spent several more weeks in the hospital followed by three-and-a-half months going to physical and occupational therapy to build up his strength.

After his ordeal, Joe returned to Grade Tech, and has never looked back. Although he has surpassed retirement age, he is still going strong and happy to be back on the job with the guys. “I’m probably the first one on the job every day; I like to get there and I’m looking forward to seeing the guys,” he said. “When I got sick, I wondered how the boys were doing and if I would ever make it back to them. I was supposed to retire, but I don’t know—I would miss it.”

Excavating is in Joe’s blood. The native Samoan and long-time California resident started as a laborer at his uncle’s excavating company. When he and Denise moved to Utah (her home state), he got hooked up with the union, but soon realized union work was not as popular in Utah as it was in California. He dropped out of the union and called Rory to ask for a job. At the time Rory was looking to fill a temporary, two-week, position. The rest, as they say, is history.

At the end of his two-week stint with Grade Tech, Joe was prepared to move on, but Rory had other ideas. Joe explained, “[After my two weeks] I was appreciative and went to say goodbye to Rory, and he looked at me and said, ‘I want to keep you.’ He has taken really good care of me, so I haven’t left. I’m a loyal man and have dedicated myself to this company and Rory and Billy.”

Joe says that he realizes that when he is on the road, on a job, he represents Rory and Billy and he wants to make sure to do right by them. “Rory and Billy are the best bosses I have worked for,” he said. “I really do respect them a lot and I know that I represent them, so I take that very seriously. It’s a good company to work for.”

Joe’s experience and expertise gets him “sent to the big jobs when they need to move something fast.” He says that he realized early on that he could learn from those before him and made sure to pay attention. Now, as the older statesman of the team, he is happy to pass on whatever he knows to the younger generation. “I respect every guy on the team and strive to bridge the gap between the ages and different mindsets,” he explained. “I am willing to teach those who are willing to learn; I have patience for the differences and hope I have helped them to succeed.”

When he’s not on the road for Grade Tech, Joe likes to hang out with Denise and the dogs. They enjoy going for rides and stopping at fruit stands. He also loves to fish and golf.

Please join us in congratulating Joe on his 8-year anniversary with Grade Tech and wishing him more success in the years to come!