Grade Tech Company Pilot Jeff Johnson is celebrating 4 years with the company this month. To commemorate that milestone, he is supporting the local chapter of the Experimental Aircraft Association’s (EAA) Young Eagles® Flights, a program that gives youth, ages 8 – 17, their first free ride in an airplane, inspiring them in the world of aviation. 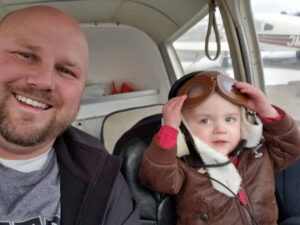 Grade Tech is donating $1,000 to the young eagles program in Jeff’s name. The charitable contribution is part of Grade Tech’s “giving back” program which supports the local community by celebrating employees’ work anniversaries (after the first 3 years of employment) by making annual donations to the employees’ “charities of choice.”

Jeff has been volunteering with the Young Eagle program for 14 years, first as a handler helping out on the ground, then taking to the sky for the past 5 years. He explains that he enjoys sharing his enthusiasm for flying and seeing how the experience can shape a child’s life. “Lots of kids want to be pilots, but don’t know how to break into it,” he says. “These kids have raw, pure emotion. Some are scared, some are excited, and for a few of them, I can tell that the experience single-handedly shaped their lives toward aviation.” 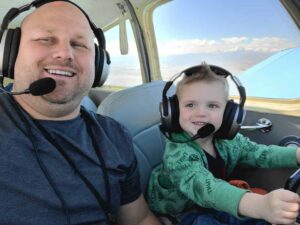 Nationwide, the EAA program has provided first rides to more than 2 million kids.

The local chapter of the group has flown more than 11,000 children, and Jeff has personally flown more than 200 kids now. Of those 200, no flight was more impactful to Jeff than the one he took with his 3-year-old niece—which turned out to be a pivotal moment for Jeff, inspiring him to become a flight instructor. 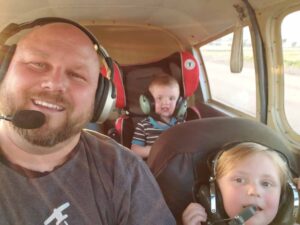 “I was able to take my 3 year old niece, who was really nervous and scared at first, but ended up giggling and asking for more when we were going up and down,” Jeff said. “She wanted to take the helm and had a blast. In that moment, I felt like she had the same passion I have for aviation. She was so excited when she saw her parents after the flight and she still wants to be a pilot!”

Rory Hall, Chief Operating Officer and Co-Founder of Grade Tech, said that he is happy to recognize Jeff’s anniversary with a donation to the Young Eagle program. “Jeff is passionate about flying and brings that spirit to the job,” he said. “I am happy to support his passion and encourage kids to give aviation a try. As a pilot myself, I understand the desire to share that feeling with young people and encourage Jeff to continue volunteering.” 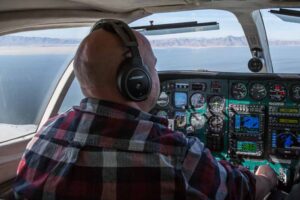 Jeff’s passion for flying began when he was a child growing up in West Valley. His parents owned a couple of planes which the family utilized for vacations, among other things. “When I was a kid I thought everyone went on vacation in a plane,” he laughs. When he was 17, he, his dad and his uncle bought a kit and built an airplane. It took 9 years, but they finished it.

Jeff says that he always thought a career in aviation started with military service until his sister received a scholarship to go to school for aviation. Wanting to explore a career in the air himself, he had a mentor teach him how to build a career in the private industry. So, he got a loan and went to school to become a pilot. It took 7 years, due to starting a family, but he persevered and graduated. 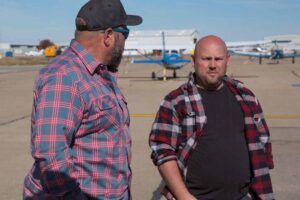 After completing school, Jeff was working as a CFI in Bountiful when the position opened up at Grade Tech.  Jeff says that he never thought he would work in corporate aviation. “I vowed I would never do corporate because I am nobody’s whipping boy,” he says. “But with Rory it’s not like that, so I gave him a chance and after a year and half count me in for a career with GT.”

Jeff also explained that he was grateful that Rory and Billy (Rory’s father and fellow Co-Founder of Grade Tech) gave him a chance despite having less miles under his belt than the typical corporate pilot. “You need 250 hours to be a commercial pilot. However, no company is going to touch you unless you have 500, and typically the magic number is 1,500,” he said. “I had 900 hours when I came on with Rory and Billy, so I am happy that they were willing to give me the chance that early in my career.” 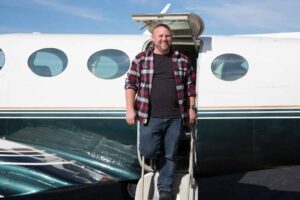 Along with the freedom and adventure that come with the job, there is a lot of responsibility for the pilot. “There’s a real chance that I might not come home and I know the risks and the responsibilities for other people’s lives. It’s not for everybody. There is A LOT of responsibility and I carry the weight on my shoulders.”

Jeff takes that responsibility seriously and is happy to say that Rory and the guys understand his dedication and respect his opinion when it comes to flying—if he says that they shouldn’t fly due to weather conditions, they never second guess him or pressure him.

When he’s not on the job, Jeff enjoys sharing his passion for aviation with his son, Max, building airplanes, studying aircraft design or flying. He also enjoys being out on the water—fishing, tubing or kayaking—and spending family time with his wife, Amanda, and their 3 children, and one more on the way!

Please join us in congratulating Jeff on his 4-year anniversary with Grade Tech and wishing him more success in the years to come!