Grade Tech is proud to welcome Jonah Carpenter, Heavy Equipment Operator, to the team. Jonah, who holds a Class A CDL and has Foreman experience, also serves as a Truck Driver and is an all-around guy who can fill in wherever he’s needed.

The Kentucky native, who grew up in West Jordan, Utah, says that he developed his interest in the trades early in life, watching family members who worked with all kinds of equipment—or “toys” as he likes to call them. When it came time to make a career decision, he knew what he wanted to do. “I was always interested in the trades, so when I went looking for work that’s where I started and that’s where I stayed,” he said. “I have some family members in welding and as a kid I liked watching them play with toys—they were toys to me and still are, all of them, even the heavy equipment today.”

Jonah Carpenter started with concrete work, then moved to pipework, dirt work, and then to drilling. He stayed in the drilling field for six years and got his trucking license during that time, allowing him to travel and drill all over the western U.S.

After six years, he decided he needed a change of pace and went looking for a new job—and found Grade Tech. “I did a lot of research into GT, watching the videos, learning about the crews,” he explained. “I really liked what I saw. I liked their willingness to train, teach and help employees grow and their philosophy of leaders not bosses. All these things motivated me to reach out to Grade Tech.”

Rory Hall is glad to have Jonah on the team. “Jonah has a great track record and brings a lot of varied experience with him, so he can support his team in many ways,” he said. “He is a true tradesman and I look forward to him building his career here.” 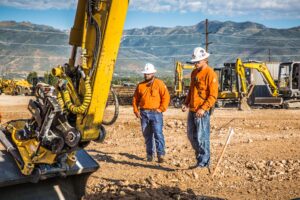 The experienced tradesman says that he likes the job and is looking forward to learning as much as possible at Grade Tech. He believes in hard work and dedication, saying that he’s always lived and worked that way, and it’s worked for him. He believes in being a “sponge,” taking all the information that is given to him and working hard at it.

Jonah also likes the travel—enjoying not being in the same place all the time—and says that he loves “getting paid for a suntan and a workout.” He also likes to see the impact of his work, explaining “at the end of the day I get to say that I was part of a team that built something.”

Of course, with travel comes time away from his family, which he says is the only drawback of the job. Otherwise, he likes the work. “I honestly enjoy it all. I like the work. I like the rush. I enjoy it all,” he said.

In the future, Jonah would like to purchase his own rig and eventually move into the geotechnical, explorational and environmental drilling industry.

Jonah has several hobbies and interests outside of work and spends his free time working on trucks and spending time in the great outdoors. He likes to tinker with diesel trucks, “decking them out; throwing more fuel and power at the trucks and building them for horsepower” and enjoys camping in his Fifth Wheel. When he’s out in the woods he hunts, fishes and hikes. A motocross enthusiast, he has also spent a lot of time on a dirt bike “until the medical bills got to be too much.”

Please join us in welcoming Jonah to the Grade Tech team!